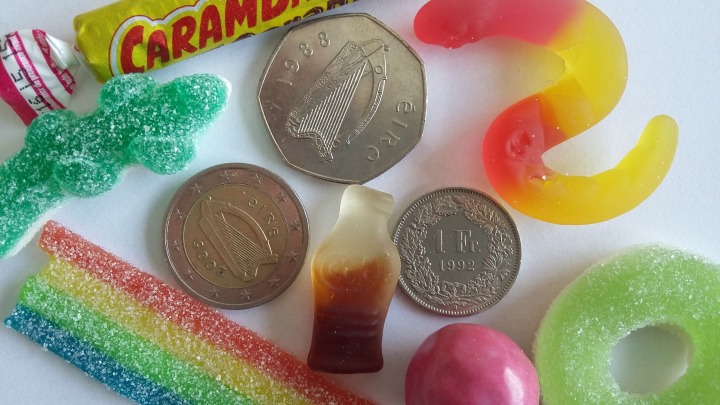 The corner shop close to where I grew up was called Hawker’s. Really. There was a Mrs. Hawker and a Mr. Hawker, and one of the great pleasures of the week was to walk down to Hawker’s on a Saturday morning with a ten pence piece keeping warm in my fist.

No coin was ever more carefully spent. The five minutes’ walking time was used to plan the exact menu of sweets so that my order was crystal clear by the time I got to the small separate counter at the side of the shop used for these important transactions.

I would allow myself two or three of the more expensive sweets – a toffee log, a flying saucer and a white mouse perhaps – and use the rest of the money to buy penny sweets such as cola bottles and fizzy lizzies. The odd time I might splash out on a fizzy cola lolly at four pence, or on a hot day spend the whole lot on a Mr Freeze.

As time went on, I started babysitting, a lucrative activity which brought in one pound an hour. This financed my broken Kit Kit habit. At this stage I liked to buy sweets from big jars by the quarter ounce, usually apple drops and pear drops, but you could also get loose bits of Kit Kat measured from a jar for 40p a quarter (or 20p for an eighth on a lean week).

Along the way I had become aware of the existence of other currencies, through my mother’s coin collection and my father’s special interest in sterling. He was always watching the exchange rate between the Irish pound (punt) and the other, rather more famous, pound sterling. The reason was that he was paid commission for the toys and stationary that he sold for an English company in Ireland. The products were priced in sterling. When sterling was strong, his customers might buy less but his commission was worth more. With the right fluctuations he could theoretically sell well when the punt was having a good couple of months and receive the some strong sterling cheques when the tide turned and the commission came in. I doubt this happened very often.

Through your first encounters with money and prices you build up a sense of the real value of things. How many penny sweets in a loaf of bread? How many loaves of bread in a bale of briquettes (compressed peat bricks for the fire)? How many bales of briquettes in pair of shoes? Eventually you have a well-developed internal price barometer and you know whether something is worth the price.

My first part-time job was as a lounge girl (waitress) in a local pub. I got paid cash in a brown envelope on Thurdays – two pounds an hour plus tips. It was more than enough to cover my expenses as a teenager. Later in college, I knew without calculating exactly what I could afford each week – the bus and train tickets, glasses of beer, visits to the places where you could get lunch for two or three pounds.

Rent on the first place I moved into when I left home was 150 pounds per month for a small room in a small house. As the nineties speeded up towards the long-awaited new millennium, life got more expensive in Dublin but I was perfectly tuned in to the value of everything, and my earning power was going up too.

A few years later, after a lot of hopping around, I was sharing a house with a colleague also in her twenties, paying rent of 300 pounds per month for a bigger room in a ‘better’ area.

And then someone had the bright idea to change the currency. The Irish pound disappeared from one day to the next on January 1st 2002 and we all had to embrace the euro. What used to cost one pound was suddenly €1.27; five pounds was worth €6.35. Retailers were accused of rounding up and hiding price increases in the confusion. Odd prices remained in place for years afterwards, especially for state services.

But we got paid in euro and we got used to it. Pretty soon I stopped trying to convert everything into old money and with one big effort, converted my entire inbuilt price barometer into euro. But it wasn’t to last. I only lived for 20 months in the Eurozone before coming to Switzerland.

At that time the Swiss franc was worth about 1.5 against the euro. It later lost a smidgen of value reaching above 1.6 in 2008 before the euro started to weaken in a steady decline that has continued (with some interludes) until today. Last year the franc was briefly worth more than one euro and it is now resting at around 1.09.

But this is happening in a country with a higher cost of living than Ireland. I am constantly surprised at the cost of things. The upshot of all this shifting about of currencies and countries is that I have lost my sense of price. The strong connection between price tags and banknotes that used to exist in my mind is gone.

We’re a long way from the toffee logs in Hawker’s and you would think that twelve years of earning and spending the Swiss franc would be ample time to adapt to its real value,  screen out the relatively changing value of the euro and completely bury all memories of the fabled Irish pound.

Maybe the only solution is to start again from the beginning. These days my kids get one franc pocket money per week and the ‘penny sweets’ here cost ten cent. How many sweets in a loaf of bread? How many loaves of bread in a pair of skis?

Does anyone else suffer from this problem? Have you ever thought about your money history? And most importantly, what did you spend your pocket money on?