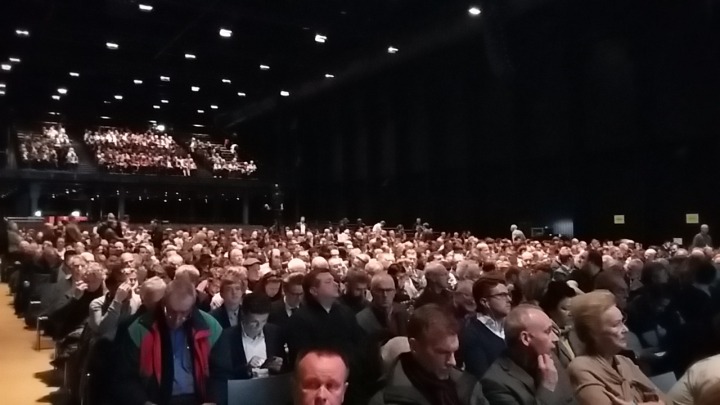 Six months ago, I sat in a concert hall in Zurich listening to Steve Bannon fantasise about civil unrest, while the audience around me murmured their appreciation in subdued Swiss fashion. Bannon was talking about the new serfdom of the working class, but this was not a gathering of the disadvantaged. Anything but.

For a start, the poor are as rare as hen’s teeth in Switzerland (OK, seven per cent of the population), but more importantly, they don’t come out on a cold weeknight and pay 40 francs to listen to a political speech, especially not during ice hockey season.

No, this was more like an outing of business clubs and retired professionals. As I wrote in The Irish Times, mostly the kind of people you would see in a city’s central business district at lunchtime, minus the young women working in lower paid roles.

It would be nice to dismiss Bannon as a political Ozzy Osbourne (also coming to Zurich soon on tour), just another ageing performer who still needs the attention or the money that a tour generates. But of course, Bannon is more than a performer, he is a master strategist who represents a powerful movement that wants to revolutionise Western society. It is clear that we, the media, need to keep tabs on him but, as the current confusion of inviting and disinviting shows, not clear whether or not to engage with him.

One thing to be very careful of in this context is journalistic ego. When Bannon speaks, the media lights up the stage. The person interviewing him gets a share of the glory. His Swiss host last March, news editor and right-wing populist parliamentarian Roger Köppel, practically swooned with excitement when he came out to introduce Bannon to the 1,400-strong crowd. The ensuing ‘interview’ was so soft it resembled a sponge bath.

Now we have David Remnick of The New Yorker and Zanny Minton Beddoes of The Economist, both struck with the same brilliant idea at the same time of inviting Bannon as speaker.

Remnick invited Bannon to attend The New Yorker Festival in October, for which he would be paid an honorarium. The news became known on September 3, unleashing a storm of criticism. The next day, Remnick rescinded the invitation without actually accepting any of the arguments that had been voiced against his plan. Reading between the lines, Remnick probably hoped to be the one to slay the dragon with his “rigorous interview” skills. While he has now dropped the festival appearance, he intends to interview Bannon again in a more traditionally journalistic setting in future.

Meanwhile, the editor-in-chief of The Economist, Minton Beddoes, is not for turning. Bannon is scheduled to take part in an event on September 15th in the Open Future festival, a 24-hour rolling event in Hong Kong, London and New York.

In a statement issued on the same day as Remnick’s, defending the magazine’s position, Minton Beddoes spoke of the importance of testing ideas in open debate. While she is clear that Bannon’s world view “is antithetical to the liberal values” of The Economist, she maintains that it is nevertheless necessary to engage in a conversation with critics, including the man she describes as one of the chief proponents of nativist nationalism.

Even Köppel echoed this approach. “If he is the devil,” he told the crowd, “we have to interview the devil!”

So what are these ideas we are supposed to test in open debate? One idea is that we, the mainstream media, are the enemy of the people. Early in the show in Zurich, Bannon called for the lights to be turned on and for the “opposition party media” (a nonsensical notion in the Swiss political context) to make themselves known. That was such an alien and disturbing moment for me as a European journalist, and I shudder to think what American journalists have gone through since this media-trashing narrative took hold under Trump.

When he’s not talking about the corrupt global elite, a good part of Bannon’s spiel is plain boasting. If you don’t stop him, he will relive the excitement of the presidential election night, literally hour-by-hour, gleefully listing the order in which the states turned red.

He does not hide the fact that the election was won on the perception that the US was in decline. The goal of the campaign he led was to sow discontent and provide simple solutions – namely a clamp-down on immigration and trade. Trump and Bannon needed voters to believe that the US was in decline and, as we now know, they used very effective social media tools to reinforce that message.

In the more hysterical portion of his Zurich speech, Bannon’s message got a bit murky. He talked about central banks debasing national currencies, and governments debasing citizenship. He proposed cryptocurrency as a silver bullet, a way of bypassing government. And then, surprisingly, he spoke about the threat of data harvesting.

“Your digital identity is extracted from you for free and used behind a cloud of secrecy to enslave you.” A strange line of attack coming from the man who helped found Cambridge Analytica. Strange is one thing, the next level of this conversation of ideas was sinister.

Bannon predicted turmoil and sounded pleased about it. When asked what he would say to people who fear the consequences of popular revolt, Bannon said it was a false choice. “You are not going to have stability. The system cannot continue as it is.”

In a nutshell, Bannon’s world view is that there is either going to be a right-wing revolt or some form of socialist or state capitalism. These are the stakes and he is clearly in favour of what he calls turmoil or unrest, in other words violence. Bannon’s aim is to provoke that revolt and I’m not sure he cares who wins, as long as the fantasy of destruction is fulfilled.

The Economist wants to expose bigotry and prejudice. I share that desire. But can The Economist, and all the other principled journalists, be sure that they are not being played? Bannon is about perception, not facts. He sounds notes at a frequency that is missed by most reasonable people but highly nourishing to his true listeners.

Sadly, the media, myself included, is as incapable of ignoring Steve Bannon as a kitten is of ignoring a dangling string. Our duty is to discuss, to analyse, to tear apart his arguments, and that may include an interview. But allowing Bannon to perform on your stage is another matter, one sure way for the kitten to end up with fleas.

2 thoughts on “Catching fleas from Bannon, a European view”